The animal kingdom is full of coronaviruses. Here’s what that means for COVID’s future.

window.tadmPageId = '409069'; The animal kingdom is full of coronaviruses. Here’s what that means for COVID’s future.

Like the flu, SARS-CoV-2 is poised to keep jumping between people and animals. 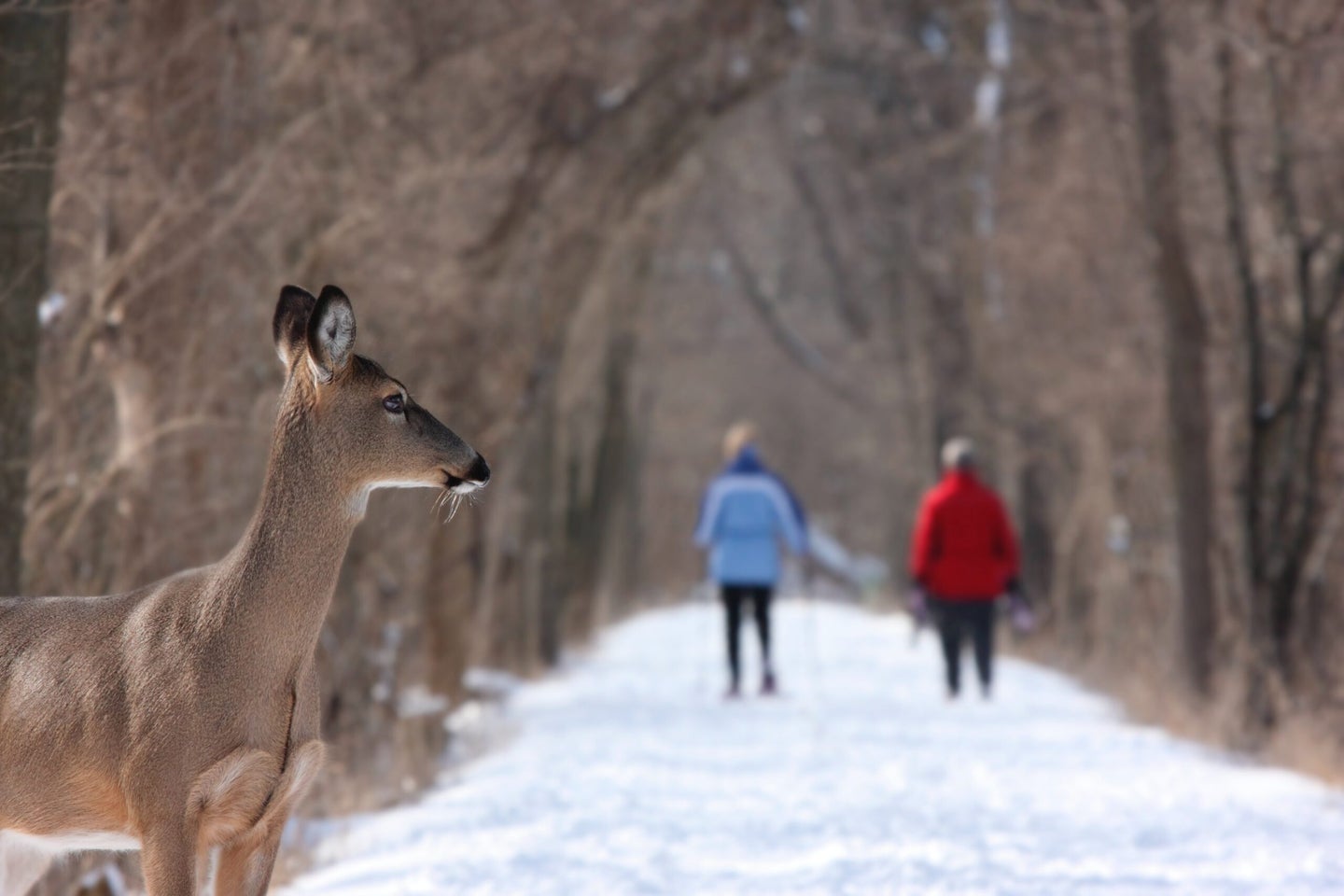 SARS-CoV-2 has been found in animals from mink to deer. Photo by Gary Bendig on Unsplash SHARE

Every year, the United States Department of Agriculture drops more than six million packets from airplanes across the east coast. The packets are covered in fish oil, and coyotes and raccoons find them irresistible. Inside, past the tasty coating, is an oral rabies vaccine.

The goal is to build up herd immunity in wild populations themselves, reported Veterinary Practice News in 2020. When about half of potential rabies carriers are inoculated, transmission falls dramatically. That in turn means that wild animals won’t infect pets or even humans. Many public health experts credit the program with containing the spread of rabies in the United States.

Why does this matter? Soon after COVID-19 exploded into a pandemic, the virus was detected in dogs in Hong Kong. Later that year, it spread to minks on Danish fur farms—and in some cases, back from minks into humans. It appeared in lions and tigers at the Bronx Zoo during the height of New York’s first surge, likely passed along by zookeepers. And this year, multiple studies have detected the virus in wild deer populations in the United States. A recent survey in Iowa found signs that deer were even spreading it to one another.

“I think we always assumed that with coronaviruses, this was a concern,” says Jason Kindrachuck, who studies emerging viruses at the University of Manitoba. “I think the breadth of the animals has become shocking.”

That has real ramifications for the long-term trajectory of SARS-CoV-2. When vaccines first became available, public health officials expressed hope that we might be able to eradicate the virus entirely. But Angela Rasmussen, who studies immune responses to viruses at the University of Saskatchewan’s Vaccine and Infectious Disease Organization, says, “We’ve only done that ever for two viruses, smallpox, [in humans], and rinderpest, which is a cattle virus. And that really only worked because those viruses didn’t infect any other species.”

Eradication hasn’t seemed likely for months. But with the virus appearing in other species, it’s virtually impossible.

Which leaves the world with the task of controlling an endemic virus.

As more people get vaccinated, says Rasmussen, outbreaks will become less common, “and I wouldn’t be surprised if it starts spreading in other animals. … It’s basically a computer program that’s going to run if it finds an operating system it’s compatible with, and it just looks like there’s a lot of compatible systems out there.”

Like the flu, SARS-CoV-2 may circulate between humans and animals, mutating slightly. And depending on how it mutates, we may need to monitor it in animals to control it in people.

[Related: Zoo animals are getting COVID vaccines made specially for them]

Right now, researchers are quick to say that they don’t know exactly where the virus might turn up, or how readily it could spread in other animals. Although the virus has now been spotted in deer multiple times, scientists don’t know whether to expect outbreaks in deer, or if the virus will fizzle out quickly. “The virus might not be very good at replicating” in deer, says Rasmussen. “It might be better at replicating. It might be more or less pathogenic or it might not be any different at all. But that’s something we just really don’t know.”

If it is widespread in deer, and causes disease, that could have significant consequences for people who rely on wild meat as a food source, says Kindrachuck, particularly in Northern Canada. “We’ve been talking about this in regards to emerging viruses with low income areas for a long period of time,” he says. “People rely on wild game across the globe for sustenance and for cultural reasons. We can’t just tell people to stop having contact with animals, but we can still guide people with different types of preventative measures.”

But viral reservoirs in wild animals could also create fertile ground for future strains of SARS-CoV-2. “Every virus will adapt to its particular hosts, meaning it will acquire new mutations,” says Rasmussen. “So a mink or a deer or whatever, could potentially select for new variants that were not seen in the human population. And then that has really unpredictable consequences for what would happen in humans.”

According to Andrew Bowman, a veterinary infectious disease researcher at the Ohio State University who documented the first cases of SARS-CoV-2 in deer, the risk is that as a virus mutates in a different animal, it begins to diverge so dramatically from the human lineage that our immune systems no longer recognize it. Then, if it were to spill back into humans, it could be the source of another outbreak.

“That situation really isn’t that different than what we see in influenza,” he says. “We have influenza viruses maintained and all sorts of species—birds, pigs. And occasionally we see them spill over into humans and that’s the next pandemic or it then becomes the basis of our seasonal flu strains.”

“We know this has happened before, because most human coronaviruses that have arisen in the past have come from animals,” says Linda Saif, a longtime veterinary coronavirus researcher at the Ohio State University.

But could we head off that future by vaccinating wild animals, as with rabies? There is a vaccine in development for mink, and early data released by its developer suggest that it’s effective in cats and dogs as well. It’s been distributed to zoos across the country for experimental use in everything from lions to gorillas.

Rasmussen thinks it’s unlikely. “This is a very different virus from rabies, which is spread percutaneously”—through skin puncture. “You can hit an animal with a blowdart, and it’s vaccinated against rabies,” something she’s seen on the ground in Malaysia. And because SARS-CoV-2 spreads so much faster than rabies, far more animals would have to be vaccinated.

And as things stand, Saif, of Ohio State, isn’t sure that the animal vaccine in development would halt transmission. In her experience, vaccines based on a similar technology have curbed the worst symptoms, but left animals infectious. It might protect populations that are dying from the virus, but wouldn’t necessarily prevent outbreaks. But she doesn’t rule it out in the future as other vaccines are developed. “Certainly, it’s possible that an oral vaccine can be also quite effective for SARS-CoV-2.”

Until then, tracking wild outbreaks will likely involve a combination of high tech genetic work, and old-fashioned public health processes—if governments are willing to invest in it.

Rasmussen and Kindrachuck are working on a project through the Canadian research program Coronavirus Variants Rapid Response Network to detect and monitor COVID variants in other species. They’re starting with a list of animals that could harbor the virus, from moose to seals and other marine mammals. Rasmussen says that she’s worried about indoor-outdoor cats, which could end up shuttling the virus into homes. From there, they’ll likely start monitoring populations to see how sick animals can get, and how the virus mutates in their bodies, in hopes of predicting which animals are likely to generate worrisome variants.

“If there is sustained circulation in animals, we’ll probably have to change some of our interactions,” says Kindrachuck.

In the last week, some states have even begun to issue those precautions. Oklahoma and Massachusetts both recommend that hunters wear masks and gloves when handling deer, and avoid the head, spine, intestines, and lungs, according to CBS.

That’s not new—hunters are already supposed to take precautions for chronic wasting disease, which devastates deer populations. People in Western states are warned to avoid mouse poop because of hantavirus, a deadly respiratory illness. And of course, in spite of rabies control efforts, you’d probably go to the doctor for a checkup if you were bitten by a dog. It will be part of the process of COVID’s transformation from an unknown newcomer to another disease to be managed.

covers ecology, the climate, public health, and more from New Orleans. His work has also appeared in Outside, National Geographic, and Sierra.